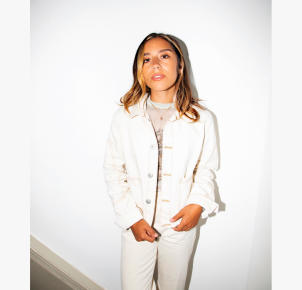 Chelcee is a self-taught musician whose knack for accessible, expressive pop songwriting has led to cuts with Kylie, Kesha, Dua Lipa, Louisa Johnson, Anne-Marie, Tom Walker and Olly Murs. But her unique voice, relatable songs and infectious personality have seen her become a pop star in her own right too with her debut single ‘Just like that’ blowing up on Spotify. But Chelcee has proven to be something of a triple threat; while the music world may be full of triple threats, few singers and songwriters’ third threat involves a parallel career as a professional footballer, having played for a number of teams including Liverpool, Everton, Tottenham and Fulham. Her career has even seen her become a renowned football presenter for the BBC where she has made a name for herself as one of the anchors of MOTDX. She is the epitome of a fighter and has had to come back from setbacks in both her music and football career. But one thing she has proven throughout her time in the limelight, is that she has the skills and mentality to come back brighter. If you’re looking to light a fire in your soul to be who you want to be, then it’s time to set yourself on the path to reaching your full potential with Chelcee.