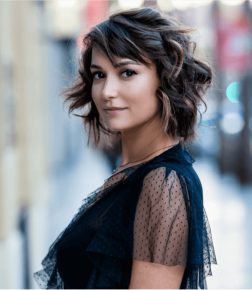 Well-loved comedian and actor Milana has been known for many of the roles she has played in her career so far. From that salesperson in the AT&T TV commercials, through to Marvel Comics’ Squirrel Girl and even the ‘Subway Rat Woman’ in Ghostbusters: Answer the Call. But it is the compelling part she is playing in trying to combat the global refugee crisis that is truly capturing the world’s attention. At the age of two, Milana fled religious persecution in Uzbekistan with her parents to make a home in America. 25 years later, she co-founded the grassroots #CantDoNothing organization, created to encourage others to give their time, money and voice to assist refugees worldwide. In 2016, Milana was named among the top 100 thinkers, makers and doers in marketing and media by Adweek, which described her as a ‘creative force for good.’ She now inspires others to become active citizens by sharing her journey to becoming a self-made artist and activist. A charismatic, funny and illuminating speaker and mentor, Milana is the perfect person to inspire your team into realizing the power that one person has to change the world. Are you ready to unleash a double shot of inspiration? Then it’s time to level up with Milana.