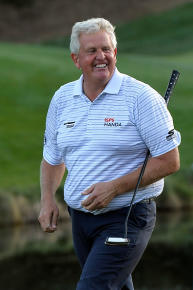 With over 40 tournament victories around the world, Colin is one of the most recognisable names in the game of golf. A Ryder Cup veteran, 'Monty' is viewed by many as the ambassador for European golf and has consistently been rated amongst the world's best golfers since moving into the Top 10 of the World Rankings in 1994. In his prime, Monty was considered one of the best drivers in the game. He also turned into a very accurate iron player, often able to judge distances exactly from long range. All this helped him become the first to win €20m on the Tour. But Colin is best known as one of the greatest Ryder Cup players in history. A member of the European team on eight occasions, he never lost a singles match - clocking up a total points tally of 23.5, only 1.5 points behind Nick Faldo. In 97 he halved the final hole to obtain the half point that clinched victory, and seven years later sank the winning putt at Oakland Hills in what many consider to be his finest hour. Then in October 2010 Colin took on the role of captain, leading his team to a famous victory by 14½ to 13½ before being crowned BBC Sports Personality Coach of the Year.