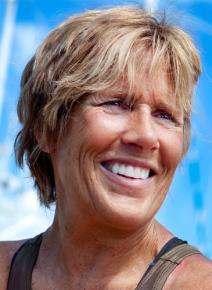 inspiring others through a story
empowering women in an organization
setting, measuring, and achieving goals

25 million people worldwide rooted for Diana as she approached the Florida shore, at long last achieving her 35-year-old dream of becoming the first person to swim from Cuba to Florida. This was her fifth attempt to swim the shark-infested 110.86 mile distance, but Diana has never been one to quit. As she stood there on the beach in Key West after completing her mammoth swim, her message to the wildly cheering crowd was one that reverberated around the world; “Never Ever Give Up”. Her amazing 52 hours, 54 minutes, 18 second swim showed the world what persistence and bold spirit can manifest. A tsunami response of inspiration came flooding toward Diana, from personal messages from President Obama and Hillary Clinton to millions of people who felt their own lives lifted with Diana’s “Find a Way” philosophy. Daring to reach for the stars, Diana has motivated the world at large to live fearlessly, to chase one’s dreams with unwavering commitment. If you are looking for a double shot of motivation and to find new levels of resilience, then it’s time to goggle up and jump right in with Diana.