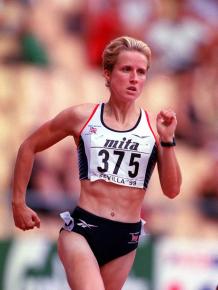 Katharine is a rare athlete that had outstanding success at both junior and senior level Athletics. Having been the fastest girl in the world aged 14, 12 years later she became the fastest woman in the world over 400m. The fastest woman in the UK from 18 years old, she flew into the 2000 season in her new event of the 400m with one sole objective - the Sydney Olympics. With a 112,000 capacity crowd Katharine ran a lifetime best to win the Bronze medal. The following year, she was the fastest woman in the world, running the gruelling one lap event in 49.59s and is still ranked both indoors and outdoors as one of the fastest women ever in the UK over the sprint events. Since retiring from Athletics, Katharine has become a highly respected lead Commentator and Event host. She is the only female TV lead commentator in Athletics, which has seen her working at numerous Olympic Games, Commonwealth Games, European Championships, as well as lead Commentator for Channel 4 at the Paralympics and Paralympic World Cup events. She is also a regular on Radio 5 Live and confidently holds her own on the hugely competitive ‘Fighting Talk’.