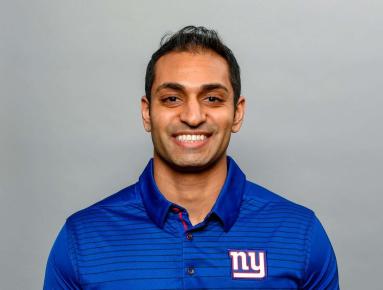 Pratik Patel is in his fourth season as the Giants' director of performance nutrition/assistant strength and conditioning coach. Prior to joining the Giants, Pratrik worked more than seven years at the collegiate level at Kansas State, Michigan State and the University of Oregon, where he had the opportunity to build, grow, and integrate sports nutrition departments from the ground up for successful football programs. He has worked with 33 NFL draft choices, including seven first-round selections. If that wasn’t enough, Pratik was also part of the 2013 Big Ten Conference, the 2014 Rose Bowl champion Spartans and the 2014 Pac-12 Conference and 2015 Rose Bowl champion Ducks.