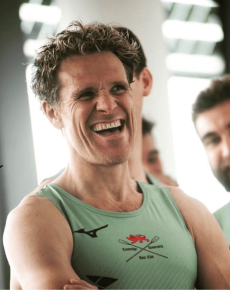 With two Olympic Gold Medals and six World Championship titles, James is an inspiring sportsman, athlete and adventurer. In 2010, James took on America, racing to cycle, run, row, and swim from LA to New York in record time. It was during this trip that James suffered a near fatal accident after being struck from behind by a truck while cycling through Arizona.

After a difficult six-month recovery period, James went to the Canadian Yukon, completing The Coldest Race on Earth. James has also successfully completed the gruelling Amundsen Omega3 South Pole Race with friend Ben Fogle and Dr Ed Coats and The race across The Atlantic, again with Ben Fogle. Both journeys were aired on the BBC and were accompanied by the books, ‘Race to the Pole’ and ‘The Crossing.’