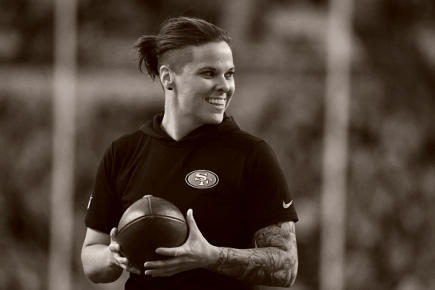 Katie is only the second woman to hold a full-time NFL coaching position, and the first openly gay coach in the NFL. Katie recently completed her fourth season in the NFL and second as an offensive assistant with the 49ers, working primarily with the Wide Receivers. Katie started her NFL career with the Atlanta Falcons after spending five years as the athletic director of the City of Kansas City.

Katie is listed as one of the 100 Most Influential Women in Sport by Sport360 and won the 2019 Rising Star Award from The Sports Power Brunch: Celebrating the Most Powerful Women in Sports. She was Outsports’ 2017 Female Hero of the Year and named in the Bleacher Report Power 50.