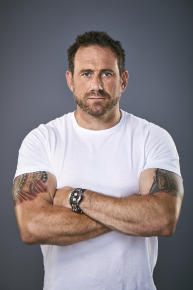 Jason is a former Royal Marine Commando and Special Forces Sergeant. Trained as a combat swimmer, demolitions expert, Special Forces dog handler and jungle survival expert. After leaving the Special Forces, Jason transitioned into the TV industry and now stars in Channel 4’s hit series ‘SAS: Who Dares Wins’; putting members of the public and celebrities through the SAS Secret Selection training programme, in the ultimate test of their physical and psychological resilience.

Jason fronted the ground-breaking series ‘Meet The Drug Lords: Inside the Real Narcos’, hailed as Channel 4’s flagship show of 2018. On top of his TV work, Jason’s motivational keynote speeches are world-renowned and he regularly leads and motivates teams in pressurised environments through ‘Break-Point’- his co-founded company alongside fellow SAS co-star and ex-special forces soldier, Ollie Ollerton. Jason also founded the charity ‘Rock2Recovery’, which aims to save and change the lives of those in our Armed Forces, our veteran community and their families who are affected by stress.