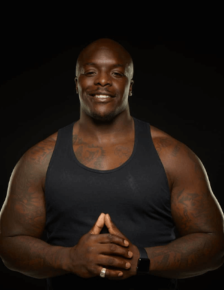 Get Ready, Get Set, Get Success
Business is a Team Sport
Secrets from High Performing Teams

Adebayo “The Beast” Akinfenwa is one of football’s greatest personalities and players. Weighing in at 18 stone of pure muscle, Adebayo was told many times he was too big to play. He soon smashed these preconceptions though scoring over 100 goals during his career including his legendary equaliser against Liverpool whilst playing for AFC Wimbledon. When he’s not on the pitch, Adebayo is also quite the entrepreneur, running his clothing label Beast Mode On. Stretching himself even further, Adebayo is now looking to the ways in which he can help young people reach their full potential just as he has, by using his talent for motivation. If you’re in need of pump of inspiration, find your peak performance with a PepTalk with Adebayo.