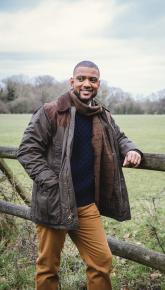 JB rose to fame as a member of one of the UK’s biggest boy bands – JLS. The band dominated the charts for five years, boasting five number one singles, over 10 million record sales worldwide and a multitude of awards. Four years ago, JB set up a farm in the Kent countryside, where he lives with his wife, Chloe and three-year-old son, Ace. Their smallholding successfully produces award-winning Kelly Bronze turkeys and free-range Tamworth pork. Now an established member of the farming community, JB has used his success within the entertainment industry to highlight his passion to educate both adults and children about the origins of their food. JB was the lead presenter on CBeebies’ BAFTA-nominated television series, ‘Down On The Farm’, created for children aged 0-6 years, teaching them about life on the farm and in the outdoors. JB’s enthusiasm for farming life and knowledge of countryside issues has seen him regularly contribute to BBC’s ‘Countryfile’ and ‘Springwatch’.