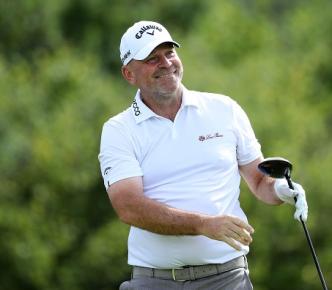 Thomas started playing golf when he was six years old but memories of clinging on to his dad’s golf bag and being carted around the course probably date back even further. As a child he was mostly found in his parents’ garden, chipping golf balls into a birdbath over and over again – not being able to leave until all the balls were safely inside. It was a case of practise makes perfect and from bird baths to birdies, it wasn’t long until he turned pro and the Great Dane has never looked back. With 15 wins and 94 top ten finishes on the European Tour, Thomas is Denmark’s most successful golfer. The Dane hasn’t just excelled on the green however. In 2007, he was appointed chairman of the European Tour’s tournament committee, a role he held for 10 years. His leadership skills have been used to good effect in the Seve Trophy, in which he captained Continental Europe in 2009, and in the 2004, 2010, 2012 and 2016 Ryder Cups, where he was vice captain to winning captains Bernhard Langer, Colin Montgomerie and José María Olazábal as well as great friend Darren Clarke. A master in leadership and team spirit, Thomas is a natural born winner and cool cucumber under pressure and can help you to be so too.