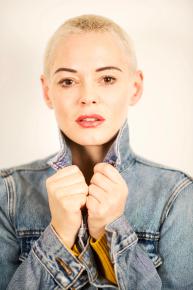 Rose is a cultural icon, whose courageous but shocking Hollywood story shook the world to its core. A true voice for the voiceless, she is an inspiration for thousands of people across the globe and a major agent for change in society. Her brave actions to stand up for what is right spearheaded the #MeToo campaign and encouraged others to not live in silent fear. It was no wonder that she was named Time Magazine Person of the Year 2017 and GQ Inspiration of the Year 2018 - the first woman to be honoured by the magazine’s annual awards. A fine actor and director, Rose is also a New York Times Best-selling author. Her heart-centred, think-piece book BRAVE took a very raw look at the sheer enormity of challenges she was faced with from growing up in a cult and falling into acting in Hollywood and how her career was stymied when she refused to play to other people’s rules. Today, Rose’s story is one of triumph over adversity that will truly motivate and inspire all those she pep-talks to break through boundaries and to become the brave humans we are all born to be.