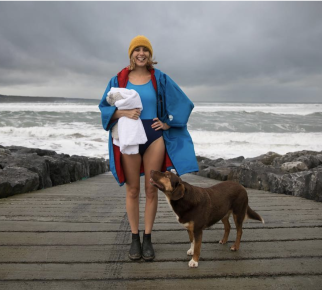 Sophie grew up in Devon and became a champion surfer at a national level as a teen. As her career progressed, she sought to foster a more diverse and inclusive surfing culture, and became a prominent voice on the topics of ocean pollution and sustainability. Proudly outspoken and honest, she gave a TEDx talk about sustainability in 2018 and has written about feminist and environmental issues such as plastic-free periods, ethical fashion and flight shame for publications including The Independent, and GQ Magazine. Sophie created the #RiseFierce collective to inspire women to try cold-water swimming. She regularly hosts retreats and hopes to build a community for like minded women, promoting positivity, mindfulness and meaningful change in society.