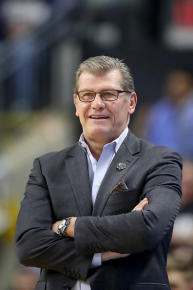 Leadership 101: Guiding Principles for Leaders
Making Decisions Under Pressure
Turn Them into a Team

As an inductee into both the Basketball Hall of Fame and the Women Basketball Hall of Fame, and the recipient of numerous awards including 27 National Coach of the Year honors, it’s an understatement to say that Geno sets the bar in coaching. A master in on and off the court on teamwork, perseverance, finding motivation and developing a winning mentality, Geno has redefined the meaning of success in women's college basketball in his 34 years as head coach of the University of Connecticut. During his illustrious tenure, Geno has picked up 11 national titles, 19 Final Fours, six perfect seasons, and 47 Conference titles. He also served as the head coach of the U.S. National Team, which won the gold medal at the 2012 Olympic Games in London and the 2016 Games in Rio.