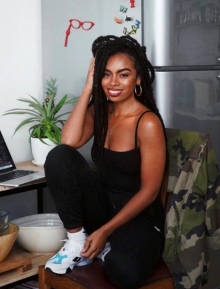 Rachel is a dancing, cooking, kick-boxing, power-house of vegan inspiration. She knows the London vegan scene inside-out but she also looks abroad for flavour inspiration, and to both her Caribbean and African roots. Rachel decided to go vegan overnight. After over a decade of digestive issues she had begun to wonder if a vegan diet might be more suitable for her. But it was literally moments after watching a particularly harrowing documentary about animal welfare in the food industry that she finally decided to take the plunge and veganize her life. And she hasn’t looked back. Since launching her YouTube channel in September 2017 Rachel has amassed over 127,000 subscribers, all hungry for her simple, affordable and delicious vegan recipes and recommendations.